Another, I didn’t know what to expect? Check.

Changing your delivery to suit a young and hurting audience? Reality check.

Welcome to the world of youth detention. A detention that outwardly shows our indigenous youth in crisis.

After my first day, I questioned myself,  how I was in a place with a massive indigenous attendance that is far greater then the percentage of indigenous people combined in one state? If that’s not an eye opener, then you my friend are not welcome with your blindness.

This puts the spotlight on an issue that compliments a range of so many man made disasters. It’s been said, Man will ruin man. And I got to see it first hand.

I was asked to collaborate with a graffiti artist named James from Metagraphics, and deliver a few workshops with kids that were either being rewarded for their behaviour, or had an interest in what we were doing. This panned out over 6 weeks, with a small number of students being swapped out for a range of issues.

I felt it was important for these kids to be able to share their hopes and pains, and that required us to earn their trust. This by no means was an easy feat. It meant that both of james and I had to be structured, but flexible in what we said and how we worked together. To get through the barrier we had to prove that we were likeable and trustworthy operators.

Two examples stand out to me. I think it was the first lesson of the second week that we challenged the kids to create stories with the use indigenous symbols. For some I started to see glimpse of hope through tragedy, for others I saw pain masked with a tough exterior. But during the discussion, there was more pain and disinterest shown in the questions that we were asking. On a dime, I turned and made a quick decision to shift focus into graffiti and look at emerging styles and the artists behind them. This was a complete change of direction but it allowed us to build on the idea that they are more than able to be just as good as the artists they were watching. If they challenged their perception of the world and dedicated their lives to honing their unbelievable talents, life as they knew it, could change.

The second experience hit me harder than I first thought.  It was a discussion about vision. If we could change anything on this wide and vast planet, what would it be? Many responded with broad statements around the idea of more love and peace which was great. They had shown us that they were united in wanting a better life for themselves and others.

One indigenous girl was emotional before she answered and was trying extremely hard to hide it. She came out with “I want to change how white fellas look at us people. Not the good white fellas but the other ones.” The harsh reality of that statement floored both James and I. How do you respond to that? Sugarcoat it and say everything is going to be ok? Tell her that there’s more good white fellas than the bad ones?  Tell them to stand tall, while they hold their shattered hearts in their hands? This problem is way bigger than all of us. That girl never came back to another class again.

I guess there are broken people everywhere. As much as I want to fix it, I can’t. I learnt this very early in starting my path, working at a local primary school. This comes down to me. What can I do as just one person? Set the example, and rise above the negativity and create positive memories. If one child, just one, comes to me in a few years and said “Mr Sarra thank you for believing in me when I couldn’t, look at what I’m doing now.” my job is done.

The mural we all participated in was a collection of the children’s stories and what was important to them.  I’d like to again thank James Alley for the collaboration, and to the staff at the Wacol Youth Detention Centre for hosting us. You guys do an incredible job under trialling circumstances. 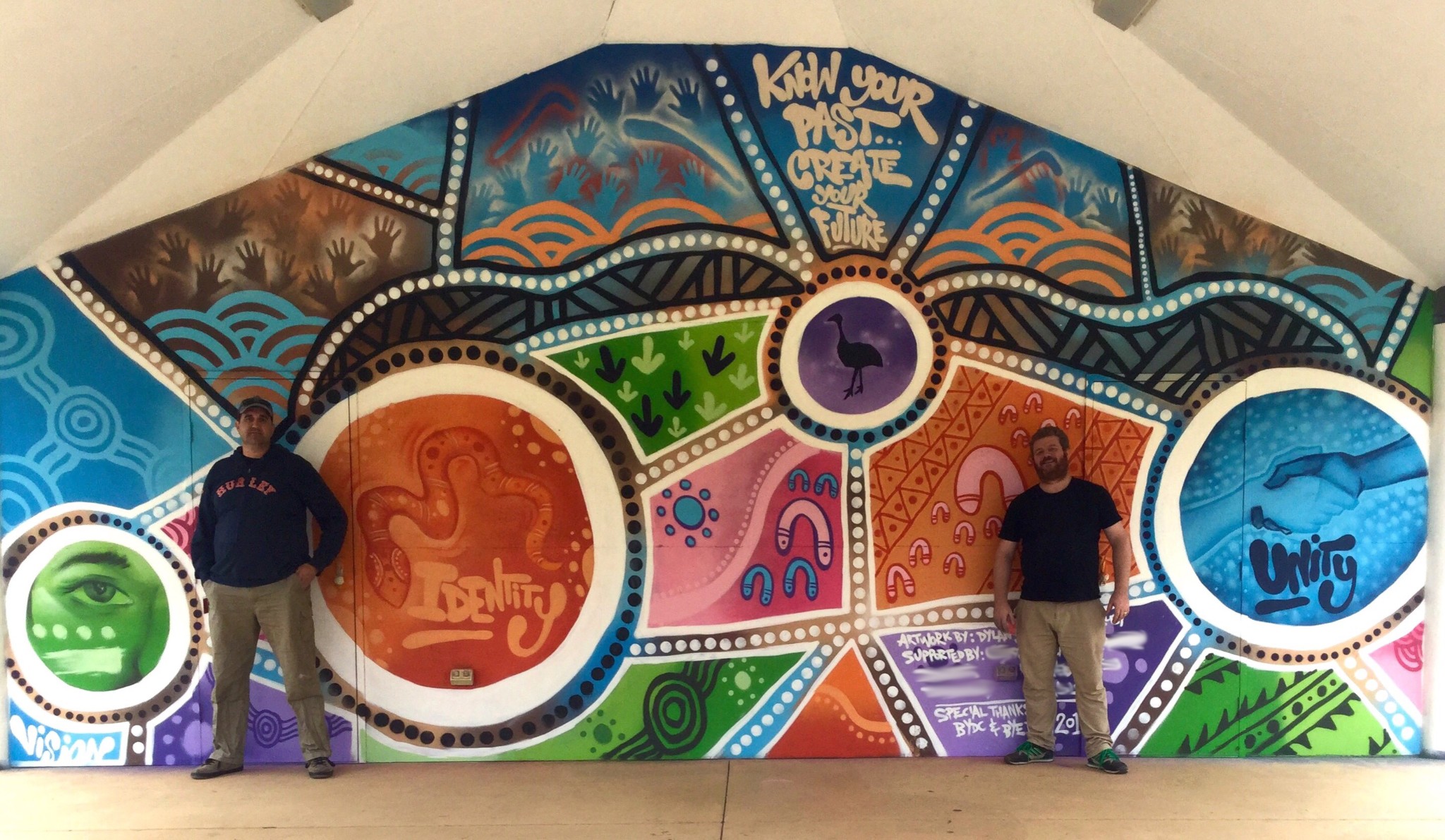