This event was a high point of my year. The unexpected huge return we got on a small budget was crazy. We have at our school a small number of parents that are committed to better outcomes for our indigenous children. It was an event that we wanted to showcase the indigenous culture and represent a history worth knowing. A lot of schools are doing there bit by acknowledging the first people’s in some way. But we hadn’t done this for some time. So to make up for it our group organised a whole week of activities on a shoe string budget and catered for many different aspects of indigenous culture. These included a boomerang throwing competition that grew into an annual competition for the teachers as well as the kids. We covered the arts as well the sports. There was even an opportunity for children to try indigenous foods like bush tomato, kangaroo, crocodile and emu. The tuckshop run by my wife, fed every teacher and student and it encouraged everyone to go home and share with others to try something new for the first time.

My most favourite part of the week for me personally, was to see everyone engage.

During the end ceremony I got to watch my daughter captivate an audience with traditional dances and I showcased an interview I had with some of the younger students.

Once I get permission, I hope to upload it. It is hilarious and gives you an insight to a child’s imagination and perception of what indigenous Australia might of been like.

To tie the week together, a mural was completed to represent everything we had achieved.

I call it ‘Connected’

To the right of the mural, the circles represented the idea that we are all connected as one race. The human race.

The kids represent the idea of presence and hope.  My uncle had just received his NAIDOC 2016 award as person of the year. He delivered in his acceptance speech, the ideal of these two qualities quite beautifully.

The statement was made in reference to our indigenous culture, “We are stronger than you think and smarter than you know.”

This embraces change and helps establish a healthy identity. Everyone has their part to play in contributing and sharing of knowledge.  I wanted to use the children to start conversations about the perceptions of aboriginal people and improve on what one might already know. So far it has worked well, as it has become a favourite place to mingle and play.

So job well done by all who contributed and many thanks to Virginia State School for allowing us to host the event.

The challenge is now how do we top this for next year? 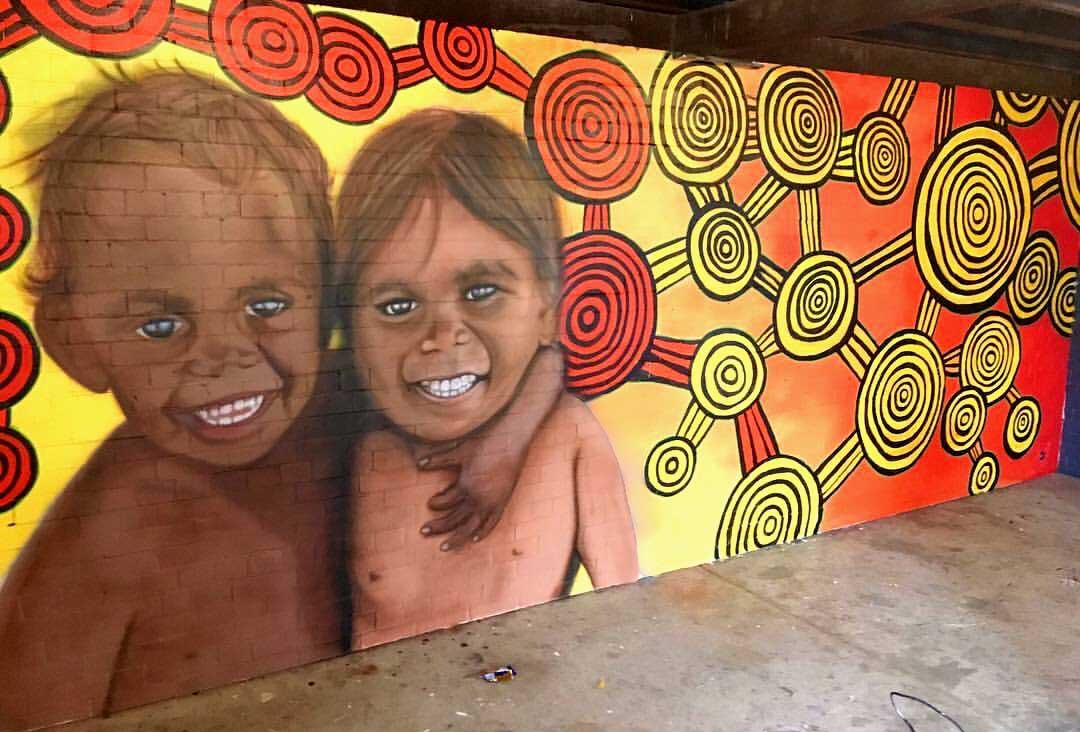 Enquire
Here’s a little project I did a little collabora

FINISHED! What a massive and self rewarding projec

When I run out of cord I need to stain more. Soaki

Through, over, down, repeat, times a million. 🪡

The Natsiaa Awards were last night, and wow what g

And now to weave. The practice of traditional weav

Still working with the cotton tree, a branch is st

This error message is only visible to WordPress admins